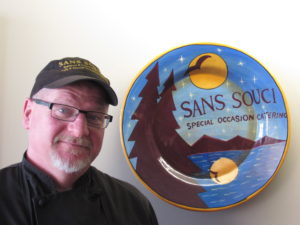 Family. Raising the bar. Challenges, success and versatility. Greg Sheridan has taken the parts of his life that make him who he is and put them into something extraordinary.

Sans Souci started in 1994 as a humble catering business, operating out of Belleville.

“I wanted to bring high-end restaurant food to the area,” Greg explains. “Instead of the same old plain roast beef and turkey dinners.”

Greg recalls the driving force behind opening his catering for business in 1994.

“I had to be the best. I embraced the challenge of creating something out of nothing,” he says. “I knew I could raise the bar from paper plates and packaged food.”

From the success of his catering, Greg decided to open up a restaurant in 2011 in downtown Belleville. From here, Greg would continue catering for the area, while also giving diners a fantastic selection of food and drink.

However, it isn’t, nor has it ever been, just about Greg. Sans Souci operates with the help of his entire family – his wife Tena, their son Graham and their daughters Gabrielle and Miranda. 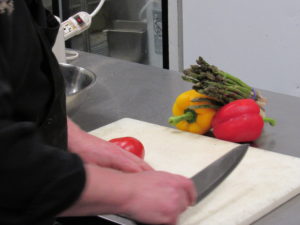 “This has been the key,” he says. “They have been my biggest inspiration to achieve, they keep me grounded. They are also my biggest support that I can always count on. When we succeed, we succeed together.”

And their successes have been many. From catering to Prime Minister Jean Chretien, or the commanding officers of N.O.R.R.A.D to every single premier of Ontario since Mike Harris.

To anyone familiar with Sans Souci, the success isn’t a surprise.

Sans Souci is a versatile establishment. The 240 Front Street location is a fully equipped café and banquet hall, serving lunches and dinners, hosting special events with an ever-changing selection of specials and warming people with its excellent service. The sought-after catering side of things allow professional, gourmet food to be served at your special event or even the comfort of your own home.

But running Sans Souci is not without its challenges.

“The constant changes of what we’re serving or the style of service, where we’re doing it and the many different clients,” Greg says, listing off some of the more challenging aspects.

That’s arguably where Sans Souci shines brightest. Sans Souci literally means ‘without worry’ in French. And that’s exactly what you’ll get. Greg will sweat the big stuff, and he’ll sweat the small stuff, so you don’t have to – all in the name of fine dining and exceptional service.